My mother-in-law reminded me a few days ago that there are certain things that your baby does that seem unforgettable in the moment, then months later you start wondering what exactly happened when. Here is my attempt to document and thus better remember these gems. 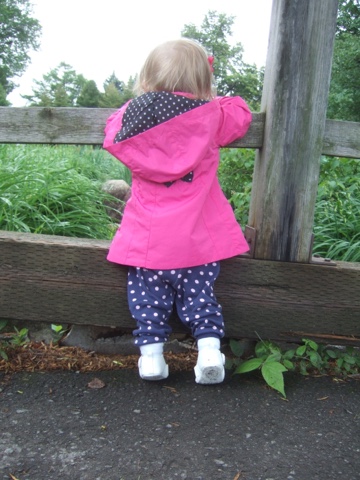 "Peeeeash" = please
This will invariably get her whatever she wants, its just too cute!
"Veeeee" = oui
"Mehhh" = merci
"Yah" = yes. Pretty much her current answer to all our questions. However, if she sees something she really wants, she'll very excitedly and persistently say:
"yah, yah, yah, peeash, peash, yah yah"
V just turned 18 months corrected this week! The oh so dreaded neurodevelopment meeting is going to be any day now, we are just waiting for the call.
Xo
C
Posted by Happy Preemie at 19:08 No comments:

I cannot believe we made it! Our girly has officially lived for 18 months sickness free! Not a sniffle, rash, cough in sight! After hearing from the respirologist the scary statistic that about 50% of preemies with bronchopulmonary dysplasia end up rehospitalized in the first 12 months, I never would have believed that we were going to make it all the way to 18!

How did we do it? Many many gallons of Purell later (they really should be a post sponsor.. pretty please?), months and months of super strict isolation tactics, having the freedom for one of us to stay home with V and a solid dose of luck!

Here is a peek into the cold busting tricks we used (the things that OCD dreams are made of...):


Now I can hear some (probably non preemie parents - yes yes, the millions of non preemie parents who read this blog) people saying that V needs to be building up her immunity and that getting sick is important. Yes. I hear you. Except for the fact that her development is a little borderline and I'm pretty sure that a hospital stay would not be helpful in developing her teeny muscles. Plus, our pediatric respirologist shared with us that the longer she can go without getting sick the better, because the larger she gets, the more healthy lung tissue she has created and the less likely it is going to overwhelm her. And at a wee 18 lbs, she is not exactly a heavyweight unfortunately. Also, apparently getting a lung infection causes inflammation that could put V at higher risk for chronic lung problems in the future. She has tons of time to catch all the lovely childhood diseases and build her immune system. For now, we're concentrating on building her lungs! 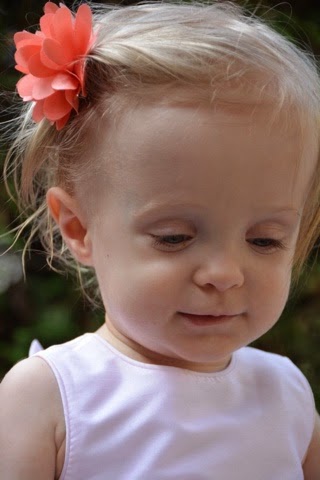 The one issue with her having never been sick is that we have no idea how she will respond when she finally does. Which encourages us to continue is our cycle of crazy isolation... because obviously it has been working for us... We are starting to wonder though, when will it be safe to stop all this?

Posted by Happy Preemie at 17:56 No comments: 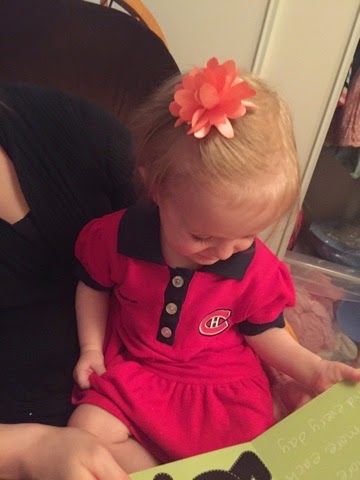 Posted by Happy Preemie at 10:27 No comments:

Why telling me not to worry infuriates me!

I told a colleague of mine the other day how proud I was that V took her first steps. I also mentionned how releaved I was because it seemed to put her back on the normal motor development track.

Her response surprised and rather upset me. She said : "Well my daughter walked at 16 months and I never worried about it. She turned out great!" Keep in mind that this colleague knows all about our preemie escapade and how far V has come. While I appreciate that the feeling behind it was to encourage or reassure me, I always feel frustrated by comments like those.

Another fav of mine is (after discussing something that is particularly worrying me) : "Welcome to the parent club." Since, you know, worrying about how your child does in karate, if they get a date to prom or about them getting good grades in math is exactly the same thing as worrying about a central part of their development that could completely alter the entire rest of their life as well as yours... exactly the same thing!!

I was trying to wrap my brain around what exactly bothers me about the comments, why they annoy me so much and I think I have figured it out. They bother me because they minimize and completely undermine my feelings. Its as though them telling me not to worry is equivalent to telling me I have no reason to worry, that I am working myself up into a worry fit for absolutely no reason, that I must be crazy or something.

This realization then kind of made me wonder how many times I had done that. Offered false or empty reassurances... "Of course you'll pass your test"... "I'm sure you'll beat this, you're so strong"...

I guess my point is that when someone is telling you about either a legitimate worry of theirs or a triumph over some great difficulty, chances are that by telling them they have or had nothing to worry about in the first place will only make them feel crappy. I'm sure lots of other people have talked about this before, I guess I'm just realizing it now and feel its worthwhile to share! Validation and active listening in those cases would have been a lot better, for me anyway...

To get back to my colleague, I guess a great response would have been amazement and awe at my daughter's great accomplishment... but then again isn't that just always the best answer to moms bragging?!

Email ThisBlogThis!Share to TwitterShare to FacebookShare to Pinterest
Labels: Relating to preemie parents

While I was at work this afternoon, our little V seems to have taken her first steps. She stepped (or tripped perhaps) from her Dada's arms to a chair. This is a distinct improvement from the insta crumble to the ground she had been doing up to now.
I'm of the opinion that all milestones are initially flukes, so here's to the biggest one yet! At just over fifteen months corrected and 28 days from her 18 months actual. Is it funny that she made it under the 18 month mark is a big deal for me? 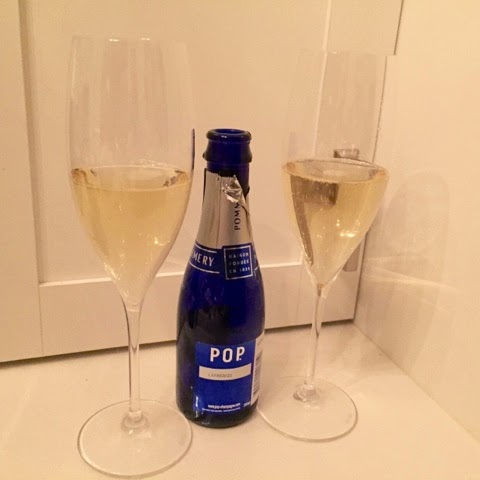 Extra sweet for us is the fact that today is our 9 year "dating anniversary". 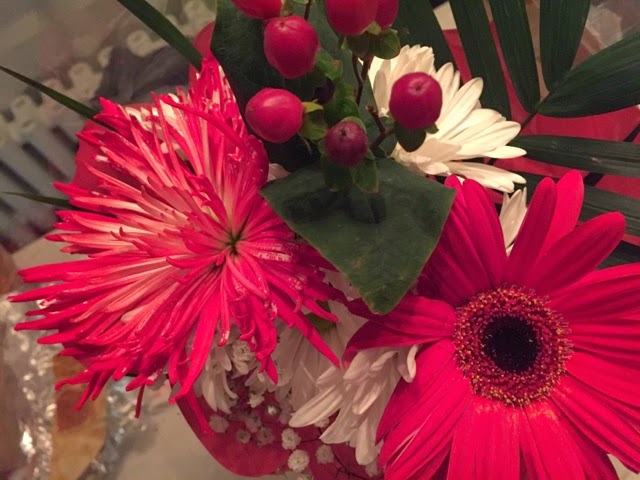 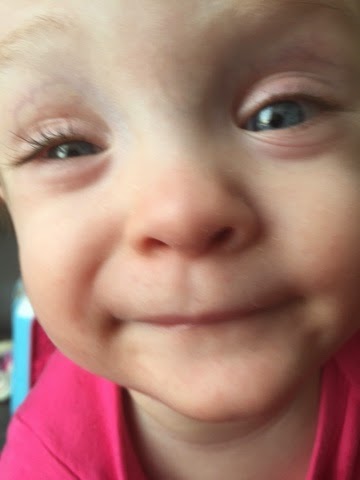 Hihi this face though!!
Xoxo
-One proud Mama
Posted by Happy Preemie at 17:18 No comments:

After a grueling winter and a scary flu/RSV season, we finally decided to pull out our good old BOB stroller (bought second hand because yowza full price is scary!) and went for a lively spring stroll! 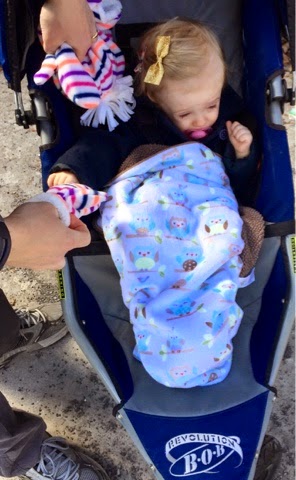 But quickly fell asleep as D and I chatted away. It was nice to get out of the house and enjoy some family time! 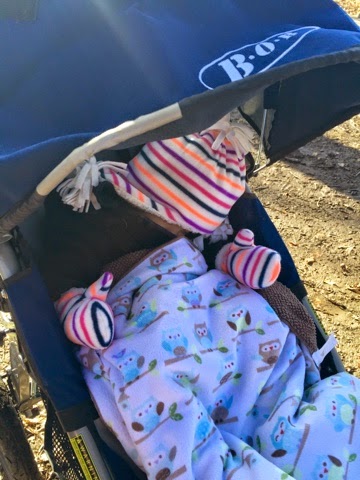 This summer is going to be great!!

Posted by Happy Preemie at 14:09 No comments:

Email ThisBlogThis!Share to TwitterShare to FacebookShare to Pinterest
Labels: a day in the life

I was rereading some old posts (whats with the nostalgia?!)

It got me thinking about how long we have been struggling-obsessed-consumed by V's weight. Right from birth, at 910g. Actually, no, before that! We were following her projected weight via ultrasound weeks before she was even born.

I don't think this focusing on weight has done all that much good really. I mean, sure, it got use to enrich her milk, which seemed to have somewhat of an effect. But really, in the NICU, we would celebrate one days of 100g increase and then come crashing down the next when she gained only 10g. The truth probably was simply somewhere in between and she gained an average of 55g per day. And knowing versus not on a DAILY basis was more of a distraction than anything. In fact, our lactation consultant was telling us that they were soon going to stop weighing daily because they found that it discouraged moms from continuing breastfeeding... Its hard to march on with breastfeeding when you are obsessing about intake and there is no way but time at the breast to measure how much your baby is actually ingesting. *insert lots of arguments with Mr. D here about how effective my initial breastfeeding was* Legitimate concerns really, she was only 5th percentile and it really didn't look as though she was taking all that much in. In the end we stuck with it and I'm fairly certain there would not have been any weight difference either way.

Read more »
Posted by Happy Preemie at 04:00 No comments: